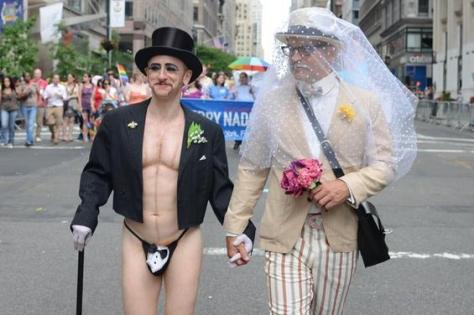 One of the pillars of the argument to redefine marriage to be genderless has been that there is “no difference” in the outcomes witnessed between children raised by both their biological parents and kids raised by gay parents.

This has not been just a side argument, it has been one of the core arguments put forward by advocates of redefining marriage. It has become gospel truth for all the major national pro-gay marriage organizations, it is repeated over and over again by mainstream media, and was even part of the ridiculous ”findings of fact” issued by the activist judge who ruled Proposition 8 unconstitutional.

Now all that could change.

My particular hope in all of this is that individuals who originally changed their views about marriage because of previous misleading research about child outcomes display the intellectual honesty to revisit their support of same-sex marriage now that we have more conclusive evidence to the contrary.

As Lauren Hoedeman helpfully reports on these pages, the New Family Structures Study by Mark Regnerus is the new gold standard when it comes to analyzing outcomes of children raised by a gay parent (or gay parents). It analyzes a far larger and more representative sample of kids who grew up in a household with a gay parent than every previous study on the subject.

Tying together strands found not only in the Regenerus research, but other research (including U.S. Census data) it is now pretty clear that gay parenting is a) extremely rare compared to heterosexual parenting and b) when it does take place, being raised by a gay parent (or parents) is a very destabilizing experience.

How rare is rare? Out of this study of 3,000 respondents, only two individuals said they were raised from birth-to-age 18 in a same-sex household (both of them in lesbian households, the study found no similar male-male households). This is not a sampling error, this is because the fact of the matter is that consistent same-sex parenting is just incredibly rare — less than half of one percent of children are being raised in a same-sex household, from the statistics I’ve seen.

How unstable is unstable? Adults raised by lesbian mothers had negative outcomes in 24 out of 40 measured categories. Adults raised by gay fathers had negative outcomes in 19 out of the same 40 measured categories. Some of these outcomes are drastically more negative (the Washington Times previews some of them here, for the rest of the statistically-significant differences, see the full study here), and exceptionally harmful, including the incidence of being abused by a parent or caretaker, or experiencing suicidal thoughts, etc.

So here are my 5 quick reasons why the new Regnerus study means its time for gay marriage supporters to revisit some of their core assumptions about the reality of gay parenting and how this reflects on the wider debate about marriage:

1. The Regnerus study is more comprehensive, larger and more illustrative than any previous study of gay parenting outcomes, and its methodology is sound.

The central question that gay marriage activists must answer is why previous studies, with far fewer participants and conducted in far less rigorous manners, should be taken as more reliable than the Regnerus study? Gay activists who are now criticizing the methodology of the Regnerus study (unsuccessfully, I believe) are the same voices who were perfectly happy to ignore methodological problems with the previous studies. Double-standard, much?

2. The Regnerus study notes that, for the vast majority of kids, being raised by a same-sex parent is an unstable experience which results in poor outcomes.

Why, if we are so concerned with child well-being (as we should be) should we regularize and equate with marriage these types of relationships and lifestyles that we now know to be far more unstable than a married husband and wife? How can gay marriage proponents continue to make the absurd argument that gay people will “save” marriage when they exhibit far less stability than the average married husband and wife?

3. The Regnerus study proves that thorough social science research simply hasn’t been done on same-sex parenting and child outcomes up until this point.

Why are gay marriage activists attempting to rush the rest of us to judgement before all the facts are in? Why not spend more time actually looking into the effects of same-sex parenting on the next generation before radically altering the nature of the institution which countless generations have found to be the optimal environment to raise children? Will gay marriage proponents cease attacking people who believe, in agreement with the best social science we now have available, that kids do best when raised by their married mother and father?

4. If gay people are “born that way” and this means they have a “right” to marry (which doesn’t follow) why does the Regnerus study find significant differences in sexual orientation based on family of origin?

If orientation is simply genetic (and not also based on environment, etc) why do children, for instance, raised by lesbians display such a higher likelihood of identifying as gay themselves? Shouldn’t the household they were raised in make absolutely no difference, if children are simply “born gay”, like we are constantly told?

5. If gay marriage is about being honest and open we need a lot more conversation about and research into the actual outcomes of kids raised in same-sex households.

Almost every cable news network and print publication in America, I would bet, has published news items and stories about the previous flawed research on same-sex parenting. Now they must carry out their equal responsibility and report on this study, or risk willfully withholding the truth from the American people, in a critical year when four states will vote on marriage and the issue could be decided by the U.S. Supreme Court.

So far the study is gaining traction, but it deserves more attention.

In the meantime, the burden is on us to get the news out far and wide.

Here is the link to the Regnerus study.

And here are some useful links on this topic:

What do you think? Does this research make you re-think your support of same-sex marriage? Does it solidify your support for traditional marriage?